Our wonderful rescue organization, Mid Atlantic Pug Rescue, had our 1st pool party at one of our members homes.  Thanks Ray, Robert and their 5 puggies for hosting.

There were a lot of peeps and a lot of puggies in attendance. Mack and I were lucky to go.  Mario was supposed to go but never made it. We know he would have loved to swim!  There was only 1 puggie that actually liked swimming.  She had recent hip surgery and was used to doing her laps in water, LOL.  The peeps really enjoyed cooling off and felt that us doggies needed to be dunked to keep cool as well.

There was lots of good food for humans and puggies and no one left with an empty tummy. 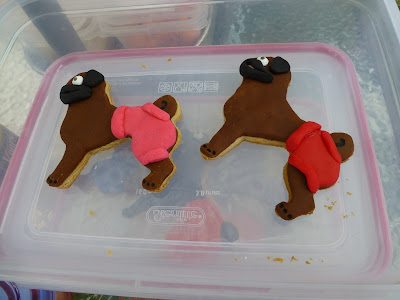 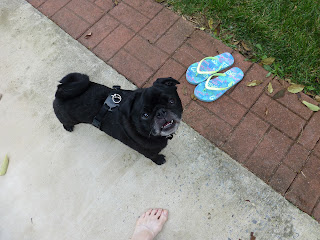 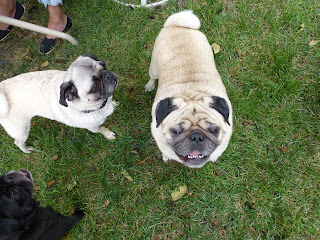 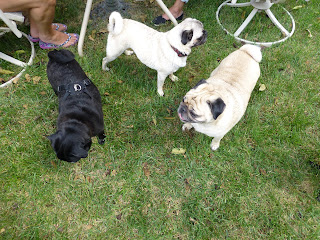 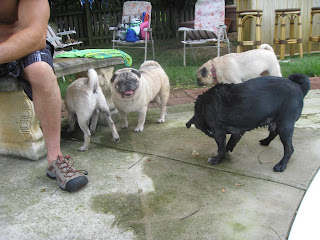 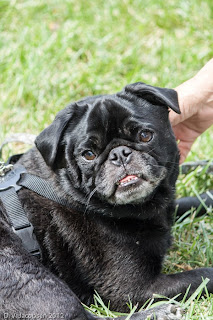 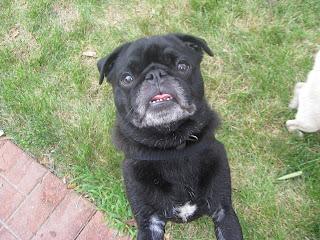 The humans did not think to get a group shot until it was too late.  Well, next year we'll get one for sure.  The human head count was around 10 or more and a lot more puggies than that!

Most of the pictures were taken by Dottie, she is the best!  Thanks, Dottie!

That looks like a great party... And those cookies are cute. Were they for the doggies or the beans.

Have a super day.

What a
Perfect
Pug
Pool
Pawty

what a fun day, but where is the pool
Benny & Lily

Well, us weenies don't swim, but it looks like you guys all had so much fun just bein' togedder!

The Army of Four said...

So much fun! Sorry Mario didn't get to go. That picture of Mack and Annie is super cute!
Love,
Christy

wow you had great fun, and the pictures of the puggies are so cute..course my little eyes were on those cookies...did someones mom actually make those or did you go to the bakery...at least if you bought them i might have somewhat of a chance to buy those kind of cookies..if someone baked them..well I am skunked!
stella rose

That was a super party! Those cookies looked delicious!

What? He has a new girlfriend?? Dammit, I wanted to meet Mack and smooch!!

Oh how fun! A pug pool pawty. I'm not much of a swimmer but I do love a good pug gathering. Mack was looking super cute with his new gal.

This looks like an awesome pool party. My human LOVES the pug cookies. They're so adorbs! Bunk wants some, thanks. ;)

Those Pug Cookies look amazing and beautiful and yummy! Bow~Wow!
It looks like you had a great time at the Mid Atlantic Pug Rescue Meet!
I cant believe you had a pool party that sounds like crazy fun!!!
I laughed that all the doggies needed to be dunked to keep cool, thats funny, Mum likes to pour water over me to keep me cool, but she takes me to the lake for a swim in hot weather and i love to swim in the lake and then have a nice cool bath after to wash me (I almost always end up a big mud pie!) what a wonderful time for everyone, I'm so glad you all had an amazing day! Minnie you look gorgeous, Mack looks so happy and poor Mario not going, what happened there???
Love, Licks and Hugs from your furiend Frank xxxxxxxxxxxxxxxxxxxxx

This design is spectacular! You obviously know how to keep a
reader amused. Between your wit and your videos, I was almost moved to start my own blog (well,
almost...HaHa!) Fantastic job. I really loved what you had to
say, and more than that, how you presented it. Too cool!

I'm not sure where you're getting your info, but good topic.
I needs to spend some time learning much more or understanding more.
Thanks for magnificent information I was looking for this info for my mission.

I'm extremely impressed with your writing skills as well as
with the layout on your weblog. Is this a paid theme or did you customize it yourself?
Anyway keep up the excellent quality writing, it is rare to see a
great blog like this one these days.

I love your blog.. very nice colors & theme. Did you make this website
yourself or did you hire someone to do it for you?

Plz answer back as I'm looking to create my own blog and would like to know
where u got this from. thanks

Thank you for sharing the information, may be useful for everything .. Greetings

Newer Post Older Post Home
Subscribe to: Post Comments (Atom)
Minnie the puggle, Mario the puggle and Mack the pug thank you for taking a moment to visit our blog! Minnie is 7 years old and Mack is 10 years old. Mario joined our family as a foster in March 2012. In December 2012 Mario became a permanent member of our family! Mario is 6 years old. We are joined by various kitties. We live in Northern Virginia.

Send us an email!